This was an amazing day that touched me and many others with me. The word for the day was Passion/Passionate. Below, are the summaries from Charlie and Paul (in blue).

The word of the day was “passion.” We may never understand why He is passionate towards us, but His coming and His caring prove that He is passionate towards us.
I had mixed feelings as we boarded the bus to head out for this day of touring. I knew our time to leave the Holy Land was getting near and I was already mourning our departure. At the same time, I was excited about the sites we would visit. I was thankful we were not headed for the Church of the Nativity at Bethlehem. This is the day we would meet Mike. An unassuming man who had a contagious excitement about Migdal Eder, the tower of the flock. Initially, I did not understand why Mike led us to the foundation and mosaic floor of an ancient Christian Church building. In retrospect, I believe Mike wanted us to understand that since early Christianity often built church buildings in places they felt had Biblical significance. And since there is evidence of an ancient Church building on this site perhaps our Christian ancestors believed there was something Biblically significant about this place. Mike suggested the Catholic custodians of this site had found something they did not want to be circulated and therefore had not developed this site. – Charlie
PASSIONATE! A fitting word for the day. As we traveled south from Jerusalem toward Bethlehem, our first stop was a ruin of a 4th-century church. An obscure place, not visited by tourists, or even shown on any maps that I am aware of. We met up with an archeologist tour guide sort of fellow who brought us to this place and revealed to us [me] this wonder under our noses. Here, literally just a few feet from a very busy highway, hidden under the sparse grass and a fine layer of dirt and dust, was a beautiful mosaic tile floor with vibrant colors revealed only when wet. Only the foundation and a few stones remained and nothing was visible from a distance. Yet this place was special…Just about three and a half miles from Jerusalem, it was a stopover place, a resting place for travelers of ancient times. Travelers like Joseph and Mary. Mary was very pregnant with our savior when they traveled to Bethlehem to be taxed. And Mary and Joseph would have stopped here in this place because even in those days this was a special place. This was the place where Rachel died. Rachel was the wife of Jacob. And the mother of Joseph, her firstborn, and Benjamin. It was during the birth of Benjamin that Rachel died. Joseph was destined to be the leader of Israel’s tribes between exile and nationhood. Benjamin was the leader of the tribe of the same name. Rachel was a very important lady. The mother of two of the progenitors of the tribes of Israel. Her name means ewe.
And here, at this most precious place, is only ruins of a church. Obscure. Not visible from the nearby busy highway. I wonder how many of those busy people going to and fro in their cars and trucks and busses have a clue of this special place. How many even know who Rachel was. Her important place in the history of the Jewish people. Her contributions are obviously important…God reserved this for us to know. His word tells us and we learn. Here in this place, I felt a kind of awe. And sadness. Sad that this great woman died in childbirth. Sad that the thousands of commuters who passed by daily were unaware and unaffected by this important place and the events that took place here. I wondered how many of us, in our busy day to day lives, stop and take notice of the awesome wonder of the gift of salvation. Passionate! As we walked back to the bus, being ever mindful of the extremely busy traffic, I felt Passionate! About my faith. About my Savior. About this beautiful land called Israel and its importance to the world. I whispered a prayer and thanked my Jesus for His Blessings. – Paul 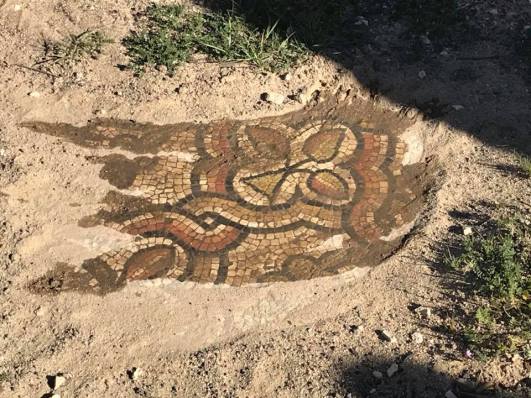 (Side note: Mike also shared that the shape and footprint of the ruins of the church building he showed to us are the same as the shape and footprint of the Dome of the Rock. Mike suggested the Moslems who built the Dome of the Rock may have borrowed their dimensions from this church building. This made me wonder if the Mosque known as the Dome of the Rock may have originally been a church building?) – Charlie
Mike then led us to the Shepherd’s Field and Migdal Eder. This very well could be the place where Jesus was born. We saw stone mangers and animal shelters which would have been subterranean. The swaddling clothes Jesus was wrapped in, the manger Jesus was laid in, and the shelter Jesus was born in may have ties to the shepherds entrusted with the sacrificial lambs which would have been born at this site. Is there any more appropriate place for the Lamb of God to enter this world? The picture in my mind of the birth of Jesus has been forever altered by the intriguing possibilities of this site. – Charlie 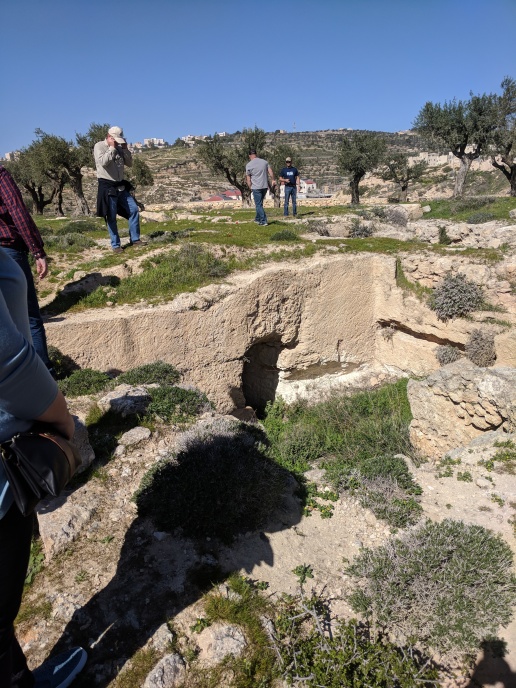 Another fascinating thing that happened while we were standing at this location. I started to hear sheep. So, I turned and looked across the valley and there was a shepherd with his sheep. They were all eating and then the shepherd made a sound or said something to them and they immediately started following him. It was an awesome reminder of how we should be following our Shepherd, Jesus. Below is a picture of the sheep and then a video of them following the shepherd.  It was quite a distance away. I tried to zoom in.

The next site was Herodium. This desert palace and stronghold was used by the Jews during their revolt against Rome. Herodium was built under the direction of Herod the Great to be the place of his funeral and internment. This site affords us a glimpse into the life of Herod the Great. He was an immoral, ungodly, and historically significant man. The political landscape of the first four books of the New Testament was in many ways shaped by this man. I do not celebrate him but knowing more about him helps me understand much of the background of early New Testament days. – Charlie 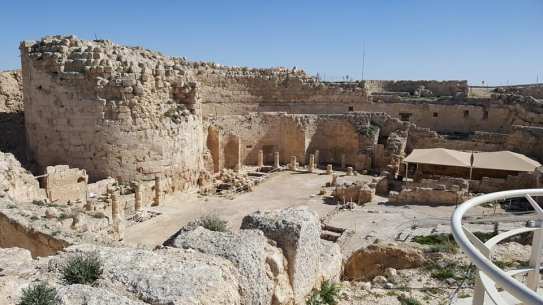 That night our entire group shared an intimate time of testimonies about our experiences in the Holy Land and how thankful we are for this opportunity. – Charlie
Thank you, Charlie and Paul, for your summaries. This was an awesome day filled with lots of interesting things to think about and research.